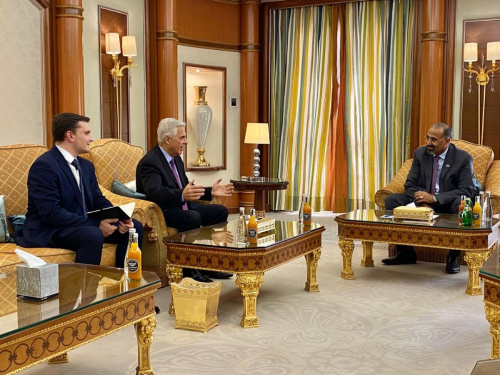 The President of the Southern Transitional Council, Supreme Commander of the Southern Armed Forces, President Aidaroos Qassem Al-Zubaidi, received on Friday, 5 June 2020 in his residence in the Saudi capital, Riyadh, the Ambassador of the Russian Federation to Yemen, Vladimir Didushkin.

The meeting discussed various issues related to the crisis in our country, in which President Al-Zubaidi stressed on the position of the Transitional Council in supporting peace and stability, illustrating the need to address the humanitarian and service file, and the need to solve the political and military file, praising the role of the Kingdom of Saudi Arabia in this aspect.

For his part, Mr. Vladimir Didushkin expressed his great pleasure in meeting the President of the Transitional Council and his accompanying delegation, stressing his country’s position in support of Riyadh’s efforts, and resolving all relevant files.