First Anniversary of the Southern Transitional Council in the European Union

On February 12, 2018, the Southern Transitional Council ceremoniously opened its first foreign representation in Berlin, with responsibility for the countries of the European Union (except Great Britain).

We, the team of the Southern Transitional Council in the European Union, established initial contacts with European ministries, political parties, civil society organizations, (political) foundations and the media. At numerous meetings and events, we have informed about the political, economic, social and humanitarian situation in South Yemen. We have aroused considerable interest in South Yemen and the current situation on the ground. Over the past year, a particularly important aspect of our work has been to raise awareness of the southern cause and to push for an inclusive peace process for Yemen. Campaigning for the integration of South Yemeni representatives of an independent South Yemen in the peace process will remain a central focus of our work in the upcoming year.

In addition, we maintained intensive exchange with South Yemeni communities and associations in Germany, the Netherlands, in Scandinavia, Switzerland, Belgium, Poland and France, and, in particular, sought to support refugees from South Yemen, who have arrived in Europe since the beginning of the war in 2015.

A busy and exciting year is now behind us and we are looking forward to our office’s upcoming second year. 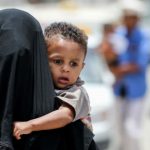 Peace in Yemen depends on a solution for the SouthNews

STC: South Yemen Must be at Forefront of Warsaw DiscussionsNews