STC: LANDMARK VISIT TO UK PUTS THE SOUTHERN CAUSE ON THE INTERNATIONAL AGENDANews 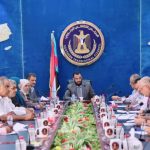 Spread of dengue fever and malaria in South YemenNews