First Anniversary of the Southern Transitional Council in the European UnionNews 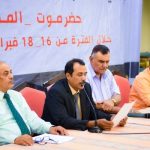 Meeting of the National Assembly in HadramautNews