On October 3, 2018, the Southern Transitional Council published an important declaration to the people of South Yemen. The explanation contains the following points: 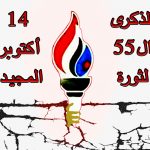 Celebrations in remembrance of October 14, 1963category #01