“Repression of media and attacks against journalists have become all too common in our world, which is why the Global Conference for Media Freedom is timely and urgent. Journalists have consistently served as the guardians of the truth, despite the growing challenges in their line of work and the very real threats to their lives, particularly in conflict settings.

“On the ground, journalists have given a voice to our communities forced to endure a devastating humanitarian crisis, violence, detention, and displacement. It is unconscionable that they are themselves targeted by parties to the conflict. Attacks on media agencies, arbitrary arrests of journalists, or censorship of media outlets must not be tolerated, and those responsible for any such attacks should be held accountable.

“The Southern Transitional Council’s vision for a democratic South Yemen is underpinned by respect for human rights and freedoms. As such, the STC takes seriously its responsibility to Southerners and to addressing any human rights violations and restrictions on freedoms. The STC remains committed to ensuring that South Yemen is a place where media and civil society can thrive and continue to speak truth to power. 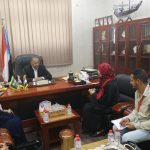 Press Statement by the STC Department of Foreign RelationsUncategorized