[Aden – 26 February 2020] The Southern Transitional Council (STC) concluded a series of meetings in Amman which included engagement with the UN’s Office of the Special Envoy for Yemen, US officials, European diplomats and representatives from NGOs. The principle aim of the visit was to examine the current escalation in Yemen, and a deep dive on the situation in South Yemen and the STC efforts to progress the Riyadh Agreement, and planning for future UN-led negotiations.

The series of meetings were an opportunity to reiterate the STC’s commitment to delivering a genuine and credible power sharing arrangement with the Yemeni government. Despite the challenges with implementation of the Riyadh Agreement, a key theme throughout the discussions was the importance of the Agreement as a stepping-stone to reinvigorate the UN-led political process and credibly address the Southern cause.

Against this backdrop, the STC stressed its constructive approach to the Riyadh Agreement and the need for equal commitment from the Yemeni government to enable the Agreement and maintain the good will fostered between the two sides over the last few months. In this line, the STC welcomed the UN Envoy’s initiative to consult with a wide range of Yemeni stakeholders on 26-27 February to generate thinking and momentum for a viable political process.

As per the Riyadh Agreement, the STC reiterates its readiness to participate in formal negotiations under the auspices of the UN Envoy. In support of this effort the STC is intensifying engagement with other Southern political groups, and in parallel stepping up development of policy positions to effectively represent the needs and aims of the Southern people at the negotiating table. 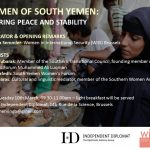