A total withdrawal of Emirati forces would leave ‚a vacuum that would be difficult to deal with‘, says Southern Transitional Council member In 2017, a soldier waves the south Yemen flag at a rally for secession in Aden (Reuters)
By Dania Akkad in London

The Emiratis may be drawing down from parts of Yemen but will continue as usual in the south where a withdraw would “leave a vacuum that would be difficult to deal with”, said a representative of the Southern Transitional Council (STC) on Tuesday.

Meanwhile, he said, the peace process led by UN envoy Martin Griffiths is “doomed to fail” unless the southerners are brought to the negotiation table, alongside the Houthis and the Yemeni government.

“I think we need to be a bit more creative. We need to think about the possibilities for Yemen and peace long term, and that includes ultimately listening to southerners,” Saleh Alnoud, legal advisor in the STC’s newly formed UK office, told a group of journalists during wide-ranging discussion.

“That in itself will give the other parties the impetus and the reason to really engage because at the moment, there is no threat. There are no consequences for the Houthis.”

The STC was formed in 2017, a secessionist movement pushing for the restoration of the former independent state of South Yemen which existed from 1967 to 1990.

In the midst of war, the group has continued to call for a separation from the north, complaining about the government’s corruption and mismanagement, and has taken over many government functions in Aden.

The United Arab Emirates‘ intervention in Yemen’s four-year war has been a boon for the STC. The Emiratis have trained and supported the Security Belt Forces, southeners closely aligned with the STC, which is also supported by the UAE.

The Emiratis stand to benefit commercially from their involvement in the south, gaining market shares in maritime trade through the use of Yemen’s southern ports and also strategically located in order to protect its interests in the Horn of Africa, according to a 2018 Carnegie Endowment report.

Dynamics around the war in Yemen have shifted in recent weeks as the Emiratis, the most critical of Saudi Arabia’s partners in the coalition fighting Houthi rebels, have moved to withdraw some of their forces.

Some analysts have said the drawdown leaves Saudi Arabia in a bind, while others have said that Saudi Crown Prince Mohammed bin Salman now has a way out of the stalemated fight.

Without mentioning Saudi Arabia once, Anwar Gargash, the UAE’s minister of state for foreign affairs, wrote in the Washington Post on Tuesday that it was “time to double down on the political process”.

“Military force alone will never solve Yemen’s Rubik’s Cube of conflicts and constantly shifting alliances – but it has created the conditions for a re-energized peace process,” Gargash wrote.

But for the STC, which is supported by the UAE, that process has been dragging from the moment the warring parties struck a hesitant de-escalation agreement in Stockholm in December.

The UN-led agreement resulted in a ceasefire that has mostly held in the port city of Hodeidah. But Alnoud said the bigger ask – that the Houthis give up arms and go back to their stronghold of Saada – can never be accomplished.

“The Houthis and the legitimate government are worried that what is being put on the table is never going to be reconciled,” he said.

Instead of confidence-building measures that move towards negotiations, Alnoud said Griffiths should accept that the Houthis are now in control of the north, and start talks from there, while inviting southerners along.

Eventually, the Houthis can “evolve into being part of the society in the north” while in the south, he said, the STC is ready to move on. “We look towards the [Saudi-led] coalition to start rebuilding the south … and not leave the south hostage to what happens in the north,” he added.

But where is Yemeni President Abd Rabbuh Mansour Hadi and the country’s elected government in all of this?

“There is a widely shared view that Hadi is incapable anymore, has very little influence – that he’s isolated and that the legitimate government is really being influenced by the Islah party,” he said, referring to the Yemeni branch of the Muslim Brotherhood.

“We would not be surprised as the STC and southerners if one day the Houthis and Islah party become one and then focus on the south.”

That leaves the Saudi-led coalition in a real dilemma, he said.

“We understand that they need to have legitimacy in the fact they are involved and Hadi is the reason why they are continuing to be involved, so they have real issues with that and I think it’s interesting times in the next few months how things will pan out.” 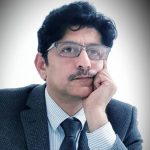 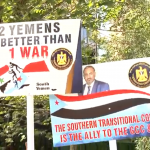