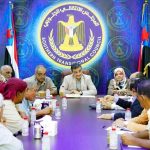 First Annual Meeting of the Southern Transitional Council in 2019category #01